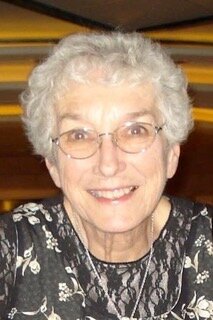 Pat and her husband Walt were active boaters and started boating when Walt was stationed in southern Texas with the US Air Force. When they retired in Michigan and joined Ford Yacht Club their boats seemed to get larger and larger ending with a 37’ Marinette that Walter watched get built in Kentucky. They boated all over the Great Lakes and Georgian Bay and became active in the Dearborn Sail & Power Squadron, a boating organization that teaches safe boating. Pat took every course that was offered and attained the grade of Senior Pilot, which meant that she was able to chart courses. She was one of the few woman to achieve that grade at that time. She also held jobs within the Dearborn Sail & Power Squadron, and at the District (state) and National levels of the United States Power Squadrons. If they needed a job done, they knew that Pat would volunteer and give it 110% effort. Pat and Walt also did a lot of traveling throughout the United States, Europe, and the Caribbean.

Pat was very active with her church, Holy Trinity Lutheran Church in Livonia, with both the altar guild and leisure timers. She loved her family and was proud of all of their achievements. She was loved by many and will be missed by all.

A Celebration of Life will occur in the spring. She will be interred at the Great Lakes National Cemetery in Holly, where Walter lies. Any donations can be made to the Alzheimer's Association or Holy Trinity Lutheran Church, Livonia

Share Your Memory of
Patricia
Upload Your Memory View All Memories
Be the first to upload a memory!
Share A Memory