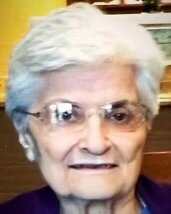 Evelyn Louise Fanelli (nee Simoncini) was the second child of Gino and Joanna Simoncini. She was born on November 10, 1928, in Vintondale, Pennsylvania. She passed away on September 10, 2022, in Waterford, Michigan at the age of 93.

She was preceded in death by her husband of 38 years, Bill, her sister, Lillian Simoncini, and her brother Mario Simoncini.

She is survived by her sister, Italia Biondo (nee Simoncini), and her children Bill (Theresa Bossu), Joann (Steven Boggs) and Greg (Jane Cubbage). She was the proud Nonna of nine grandchildren and 2 great-grandchildren.

She graduated from the St Francis School of Nursing as a Registered Nurse in 1949. She moved to Detroit in 1950 to work as a public health nurse for the City of Detroit Health Department. In 1954 she took an Italian course at the University of Detroit. It was there that she met her future husband Bill, whom she married in 1956.

Her nursing career spanned 37 years.  After working for the city, she worked at Highland Park General Hospital. In 1974 she began work at Rochester Crittenton Hospital, where she led the Coronary Care Unit and then was chosen to lead the new Intensive Care Unit. She moved into administration where she worked as the Assistant Director of Nursing until her retirement in 1986.  The nurses who worked for her described her as an “amazing boss”, an” inspiration” and a “woman of integrity and virtue”.  One nurse commented that if not for Evelyn’s mentoring and coaching, she would have left nursing. Her medical expertise was second to none. One staff doctor described her as the “most knowledgeable nurse I have ever known.”

She was a strong advocate for patients and those who worked for her. That healthcare advocacy extended to her family, immediate and extended.

Devout in her faith, her grandchildren fondly remember her ritual of sprinkling Holy Water upon them with a blessing as they would depart.

The family acknowledges the special role of Joann and Steve Boggs to care for our mother/Nonna during her final years.

Memorial donations can be made to the

Share Your Memory of
Evelyn
Upload Your Memory View All Memories
Be the first to upload a memory!
Share A Memory