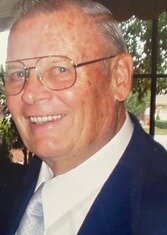 Howard (Hod) LeRoy Chumley, age 93 of Sterling Heights,
Michigan, passed away August 1, 2022. He joins his beloved
wife Patricia, (deceased August 28,2021) in their next chapter
together.
Hod was born June 3, 1929 in Valparaiso, Indiana. Hod served
in the Unites States Navy and was a proud Veteran of the
Korean War. He enjoyed football and played on the Navy team.
Hod eventually made his way to Michigan and worked for
Michigan Bell as a Yellow Pages Salesman and it was there he
met Patricia - Patty - Andrews. They married and spent the next
43 years by each others side.
Hod and Patty kept busy in retirement using their time visiting
with friends, taking drives, reading novels and newspapers, they
enjoyed playing cards and completing crossword puzzles.
They loved time with family and especially their collective 5
grand children and 2 great grand children.
Hod was a big fan of golf, playing up until just last year with a
few buddies that would meet each week.
Hod leaves behind one daughter, Elizabeth Lipko, two stepsons,
Dave(Karen) Andrews, Douglas(Kathleen) Andrews, five
grandchildren: Taylor, Kelsey, Jonathan, Wyatt, and Luke and
two great granddaughters, Alice and Ivy.
A memorial/dedication will be held Monday August 29th at
10 AM at the Great Lakes National Cemetery in Holly Michigan.
In lieu of flowers the family would prefer any donations be made
in Hods name to Hospice of Michigan.

Share Your Memory of
Howard
Upload Your Memory View All Memories
Be the first to upload a memory!
Share A Memory