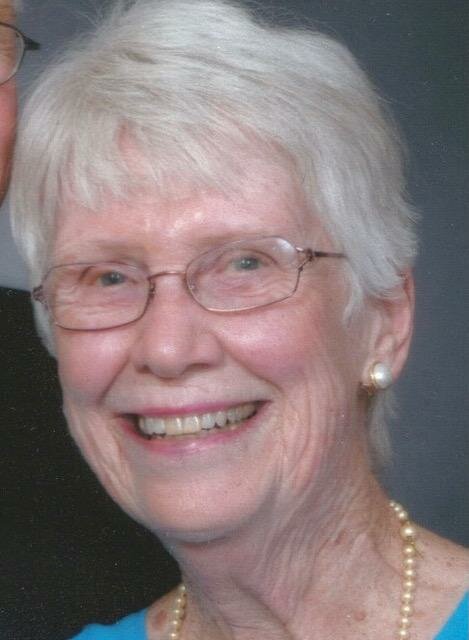 Rosemary was born to Frank and Jeanette Finger of Marissa, Illinois on October 21, 1929.  In high school, she enjoyed playing the cornet and participating in theatre productions and began to date Jack. Rosemary earned a Bachelor’s degree in Business in 1951 from the University of Illinois.  After graduation, she worked for McDonnell Aircraft in St. Louis.  She married Jack in 1952 and they settled in the Detroit area in 1956.

Rosemary was a member of Northminster Presbyterian Church for many years, where she made many friends, was the Chair of the Trustees and sang in the choir.  She was a Girl Scout leader, room mom and library staffer and gave tours at Meadowbrook Hall in Rochester, MI, where she later became a member of the staff.  She loved to travel, read, sing and knit.

Rosemary and Jack enjoyed traveling with the Nomads Travel Club and with a group of friends who explored Europe by bus.  On one trip to Spain, they fired the local guide and Rosemary used her college Spanish skills to charm a police officer into escorting them across town.  They loved to sail, and cruised in their sailboat in the Canadian North Channel every summer until they were 75.  Rosemary and Jack moved to the Fox Run Retirement Community in 2006, where Rosemary made many new friends, headed the Treasure Chest resale shop, sang in the choirs and served on the library committee.

Rosemary had a kind word for everyone she met.  She was positive, warm and vibrant.  She adored her grandchildren and great-grandchildren and they returned her love.  Her family all loved her deeply.   She will be sorely missed by all who knew her.

A memorial and celebration of life service will be held at a later date.  Donations may be made to the Michael J. Fox Foundation for Parkinson’s Research, P.O. Box 5014, Hagerstown, MD 21741-5014 or through Michaeljfox.org.

Share Your Memory of
Rosemary
Upload Your Memory View All Memories
Be the first to upload a memory!
Share A Memory