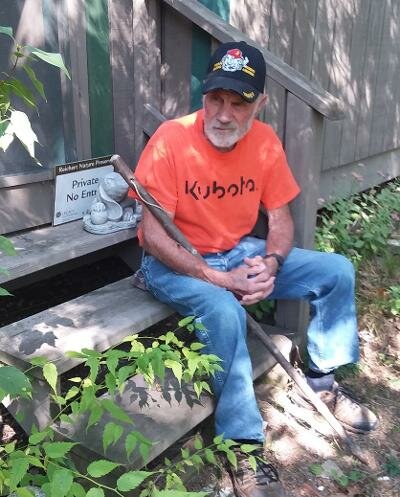 Nick was born in Ann Arbor on March 19, 1937 to the late Robert and Mary Rayer. He graduated from Pioneer High School in 1955, where he was known to be a very fast barefoot runner!  He was a proud Marine that trained at Camp Pendelton, California and served in the Philippines from 1955-1958.  He and his late wife Donna (Skomp) were married in 1962.  They made their home in Pinckney, MI for over 55 years.  Nick worked for Michigan Bell in Ann Arbor for over 30 years and retired in 1989.  He started as a lineman and retired as a supervisor.  He joked that some called him the “squirrel” because he was so good at climbing telephone poles.  Whenever he would drive through Washtenaw County, he would point to places all over where he and his crew had buried telephone cable.  When he retired from Michigan Bell, Nick went to work part-time at Huron Metro Parks Area Golf Course in Dexter, MI where he worked and golfed for many years.

Nick, also known as the “Hed Lob” was a legend known for his generosity, humor, outgoing personality and often his wild antics (many recall having a spit of Redman chewing tobacco on their foot!).  He was loved and admired by many, and had friends everywhere.  Nick was larger than life and had an infectious personality that drew people to him.  He loved the outdoors and hard work.  He was an avid outdoorsman known for his hunting skills and love of all things outdoors. Nick used his skills to help others by plowing driveways in the winter, building sea walls in the summer, cutting down trees and chopping wood year-round.  He worked hard and played hard.  He enjoyed bowling and golf in his younger years, and up until this past year he would still get in as many holes of golf as his body could handle.  Nick loved to stay active whether it was working outdoors, building things, hunting, bowling, golfing, going to the gym, the Pinckney Bakery, the casino, or reading.  Donna used to say that Nick created jobs around the house, just so he would have something to do each day.  He was “tough as nails”, could do just about anything.

Nick and his late wife Donna (1939-2020) were caretakers of a large piece of property in Pinckney, Michigan for 52 years.  They cared for what is now known as Legacy Land Conservancy.  Nick was skilled at the use of his various tractors, tools and chainsaws and used them to clear, maintain and manage the property, woods and ponds where they lived.  He and Donna loved living there and taking care of the beautiful property and various animal and pets over the five decades they lived there.  There was always someone stopping by their house to have coffee and chat, borrow a tool, hunt and a slew of other things!

Nick is survived by his children; son Nicholas Leon Rayer, Jr. (his wife Trisha), daughter Sally Lane (her husband Jon Hall), and his two grandsons Mitchell and Jacob Rayer, who he adored and was so proud of.  He also leaves behind his faithful companion Queenie, his beloved Rat Terrier.

Nick’s presence will be missed by so many.  He leaves behind a lifetime of stories, anecdotes, deer antlers, guns and memories.  Semper Fi and Rest in Peace Dad.

No services are planned at this time.

Share Your Memory of
Nicholas
Upload Your Memory View All Memories
Be the first to upload a memory!
Share A Memory