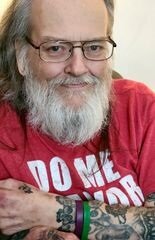 Tim Horton’s stock dropped sharply this week as news of the May 8th death of James (Animal) Penix became public.  Tim’s executives scheduled an emergency Zoom meeting to prepare for this unprecedented drop in coffee sales.

Better known as Animal Weretiger by everyone who met him, he was that box of chocolates that you were a little nervous about what you’d get but found you just couldn’t resist taking a chance.  Artist, jokester, musician, warrior, poet, student, teacher, husband, father, friend, storyteller, comedian, and of course as we all know, he was Batman. His greatest joy was found in making people laugh. Whether it was playing 70’s TV theme songs on a penny whistle or repeating irreverent stories of past shenanigans, if he could make someone laugh until they couldn’t breathe, he was in the zone. An achievement only slightly more delightful to him than farting on people without their knowledge and getting away with it.

In life he loved history, French fries, a well packed bowl, his Tuchux tribe and chosen family. He never missed Jeopardy, loved motorcycle videos on Youtube, and was loyal to his Steelers, Red Wings, and Tigers.  He claimed to be “forever the optimist”, though family members believed that he used these long games as a convenient nap opportunity.

It has been said “Real courage is when you know you're licked before you begin, but you begin anyway and see it through no matter what.”  Animal faced his illnesses, decline and death just that way, with real courage, strength, and honor.

He is survived by wife Faith and two sons, Jim (and fiancée Lydia) and Conor, cousin Jeff, aunt Mary, and several sons and daughters in spirit. He will be remembered and missed by many.  A celebration of life will be planned for later this year.