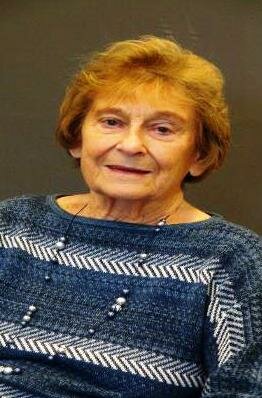 Anne Carter Nelson Harnden passed away on April 11, 2022 at the age of 92 following a diagnosis of lung cancer in October, 2021.

Anne was born and raised in Blackstone, Virginia and was always very proud of her Southern roots.  She was valedictorian of her high school class in 1948. She attended the College of William and Mary, majoring in French, and graduated with a Bachelor’s degree in 1953.  She taught English in Roanoke, Virginia and met James (Jim) Harnden in the Spring of 1954, while Jim was about to be discharged from active duty service in the United States Navy.  They married in September of 1954 and moved to Boulder, Colorado so that Jim could pursue his Master’s degree at University of Colorado.  Anne and Jim moved to Dearborn, Michigan in 1956 after Jim accepted an offer at Ford Motor Company.  Following a 2-year assignment in Sao Paolo, Brazil, Anne and Jim moved to Farmington Hills in 1970, where they raised their family for the next 19 years.  Anne was a devoted wife and mother to her four children, helping them to pursue their interests in activities such as swimming and running.  She took up the sport of running herself at the age of 45, and ultimately trained for and completed 2 full marathons in 1980 and 1982 at the ages of 51 and 53.  She also volunteered at the Lighthouse in Pontiac for more than 25 years and was an active member of the Church of Our Savior in West Bloomfield, where she built a community of close-knit friends.  Anne’s other interests included playing bridge, knitting, and watching sports, with her favorites being college basketball (especially University of Michigan where she once held season tickets), baseball (the Detroit Tigers), and tennis.  Anne and Jim moved to Green Lake in 1989 and following Jim’s retirement in 1993, they enjoyed traveling and spending time with family and friends.  They moved to Fox Run in Novi, MI in 2015, where she made several close friends and was able to display her hobbies and collections.

A Memorial Service for Ann and Jim will be held on Saturday, May 7, 2022 at 11:00 AM at Fox Run Senior Living Community, 41000 Thirteen Mile Road, Novi, in the Belmont Clubhouse, Derby Room, followed by an open house until 2:00 PM.

Donations in memory of Anne may be made to Forgotten Harvest or Angela Hospice.

Please share a memory of Anne on her Tribute Wall.

Share Your Memory of
Anne
Upload Your Memory View All Memories
Be the first to upload a memory!
Share A Memory