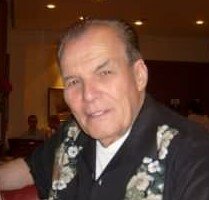 Dave joined the Army after high school, honorably serving his country both here and abroad in Germany.  He was a member of the Moose Lodge, the VFW, the Fraternal Order of Eagles, and the Polish League of American Veterans (P.L.A.V.) for much of his life.  In his early years, Dave often worked second jobs to support his family, while building his barbering business, Grimes Barber Shop. His hardworking-mentality remained with him all his life, cutting his last head of hair at age 82.

Dave always enjoyed traveling, having spent more than 30 years enjoying time with his three kids & former wife Helen (Joan) at the family cabin on Otsego Lake in Gaylord, MI. Over the years, his love of travel grew to include vacations to places such as Las Vegas, Hawaii, Florida, Louisiana to attend the Mardi Gras, China, Egypt, Ireland, Rio de Janeiro, Brazil and many more.

Dave also enjoyed meeting up with friends at many places all over town.  His presence is sure to missed by all the friends he’s made through the years at some of his favorite places like: The Telway, Donut Castle, Donut Hole, Shakers, Mangan’s Irish Hut, Malone’s, Vivio’s, Alibi,     Tipsy McStaggers, Snoopy’s, Victory Inn & The Raft.

Dave Duffy was one-of-a-kind; to know him was to love him. Dave could be quite a character, with his many stories and good sense of humor, and ability to make friends of all kinds. His generous nature helped many during struggling times. Dave’s presence will be missed by all the family and friends he has left behind.

In Dave’s honor, his family requests that you raise a glass and toast,      “To Dave, a really great guy who truly lived every day of his life to the fullest!”

Share Your Memory of
David
Upload Your Memory View All Memories
Be the first to upload a memory!
Share A Memory