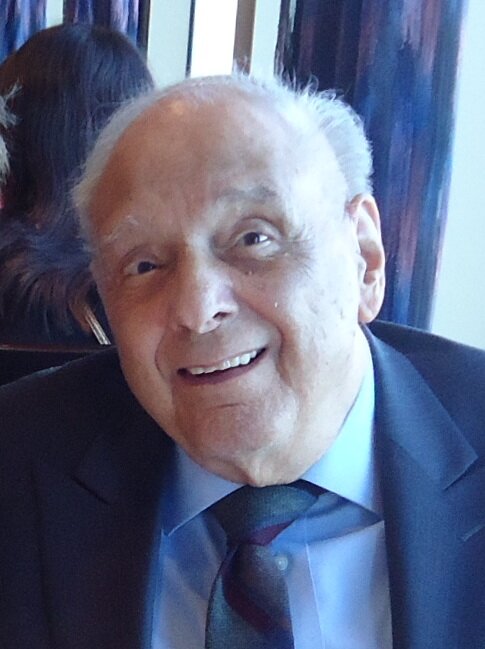 Samuel Edwin George, 96, passed away peacefully at his home on January 10th, 2022. Born September 18th, 1925, in Chambersville, Pennsylvania, to John and Louisa (Banatta) George, Sam was the second youngest of 8 children. He went to Indiana High School in Indiana, PA, and was drafted into WWII during his senior year.  PFC George was attached to the famous 69th Infantry Division. From the time they landed on European soil, the 69th was in the thick of battle up to the time of the surrender. Sam was awarded the Bronze Star Medal for meritorious service in connection with military operations under the most adverse conditions. After the War, Sam returned home and finished high school.  After graduating, Sam attended Indiana Teachers’ College in Indiana, Pennsylvania, for four years, earning a Bachelor’s Degree in Education.  He taught business in Coudersport, Pennsylvania for ten years before returning to college to earn a Master’s Degree in Counseling.  He then left Coudersport to become a high school guidance counselor in the Baltimore Public School system.  He retired from education in the late 80’s to move to Michigan and help his sister care for their mother, later caring for two sisters and a brother. A life-long bachelor, his family meant everything to Sam and he was always there for them. In retirement, Sam loved to visit family and friends back in Pennsylvania and Maryland, try adventurous new things like goat yoga, and he even took a cruise in his 90’s to Alaska to see the glaciers.

Sam’s wishes were that no service be held and that he be cremated and interred back in Pennsylvania.

Share Your Memory of
Samuel
Upload Your Memory View All Memories
Be the first to upload a memory!
Share A Memory