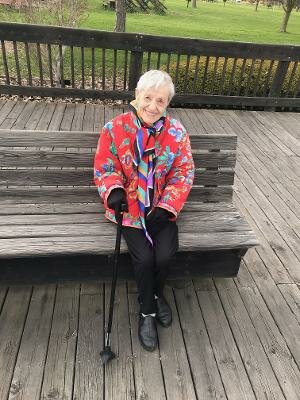 Marguerite Dembry was born April 22, 1927 in Le Pertre, France. She remained in France throughout WWII and its aftermath and earned her doctorate in law. She met her husband George in Paris and moved to Boston, MA in 1954 where they were married. She maintained a European atmosphere in her home, taught her three children to speak French fluently and would refuse to answer if they spoke English. She also taught several of her grandchildren to speak French and brought them to France several times to visit her family. An elegant woman with a Parisian flair, she enjoyed good food, reading, travelling, haute couture, and maintained many friendships for decades. She suffered a stroke in late 2017 while travelling in Paris however regained her health until she died peacefully in her Grosse Pointe Park, MI home on September 15, 2021.

She is preceded in death by her husband George, brothers Jean, Claude, and sisters Madeleine and Marie Madeleine. She is survived by her sister Cecile, daughters Anne and Louise, son Paul, seven grandchildren and six great-grandchildren as well as many nieces and nephews in France and relatives in Canada.

Share Your Memory of
Marguerite
Upload Your Memory View All Memories
Be the first to upload a memory!