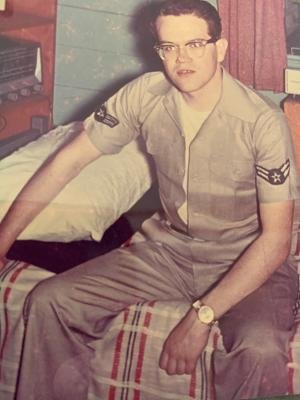 Kenneth Edward Turpin, 77, long time resident of Springfield Township Michigan, died on Saturday, July 10, 2021 peacefully at home. Ken was born on March 7,1944 in Detroit, Michigan to the late Dudley Keith and Jeanette Elizibeth Turpin. He was a veteran of the United States Air Force serving as a medic in the 439th USAF hospital, 39th Air Division (PACAF) at Misawa Air Base in Japan. After serving in the Air Force, he spent 30 years in the financial industry and retired in 1998. After his retirement, Ken enjoyed collecting stamps, coins and sports memorabilia. He was an avid fan of the Detroit Tigers and the Detroit Lions. He also enjoyed movies and his favorite actor was James Dean. His most enjoyable moments in life was being at family gatherings and telling jokes. Also preceding him in death was his wife Sandra Louise Turpin, his sister Carol Mueller Turpin and brothers Stuart and Douglas Turpin He is survived by his daughter, Kimberly Ann Turpin (Janice) of Eagan Minnesota, his son’s Keith Scott Turpin (Julie) of Hartland Michigan, Aaron McCullough (Melisa) of Lake Orion Michigan, Josh McCullough (Michelle) of Clarkston Michigan; one sister, Mary Beth Mandilk of Walled Lake Michigan, two brothers, Robert Malcolm Turpin of White Lake Michigan and Dudley Scott Turpin of Durand Michigan; five grandchildren, Jacob Zakary Turpin, Ben, Caitlin, Tyler and Jersey McCullough. Loving uncle of several nieces and nephews. A celebration of Ken’s life and a memorial service at Great Lakes National Cemetery will be held at a later date. In leu of flowers, he asked that donations be made to Kindred Hospice of Flint.

Share Your Memory of
Kenneth
Upload Your Memory View All Memories
Be the first to upload a memory!